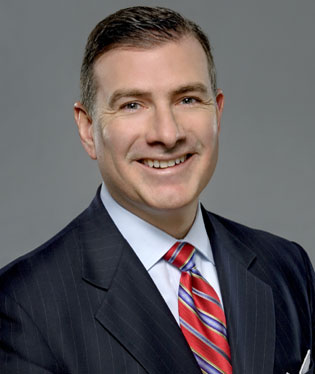 Mr. Dunican is a nationally recognized law firm leader who was elected Managing Director of Gibbons in 2004, at the age of 36, and was highlighted by Law360 during his tenure as one of the nation’s most innovative managing partners. He was named the firm’s Executive Chairperson in 2022.

Mr. Dunican led the firm’s growth into a major Mid-Atlantic regional powerhouse. He accomplished this by establishing a corporate management model and implementing innovations to advance Gibbons as a standard-setting 21st-century law firm, supported by state-of-the-art facilities and technology, streamlined expenses, and an outstanding management team to execute, evaluate, and refine these policies and platforms.

A regular Irish Legal 100 honoree, Mr. Dunican received a 2019 Tip O’Neill Award from the Donegal County (Ireland) Council, presented annually to people of Irish background in recognition of achievements in their chosen fields and their interest in and support for Ireland and its diaspora. In 2017, he was the Essex County Bar Association’s selection for a Professional Lawyer of the Year Award, presented by the New Jersey Commission on Professionalism in the Law in conjunction with bar associations throughout the state.

As Executive Chairperson, Mr. Dunican handles the firm’s more outward-facing programs. He is the chief public spokesperson for Gibbons, which entails issuing public statements on behalf of the firm, directing the firm’s response to media queries, leading existing and prospective client interviews, and coordinating political events and donations. He develops and implements platforms to advance new business generation, practice development, firm expansion, client relations, marketing, branding, and public relations. He also handles various special strategic and operational projects, including the review and negotiation of office leases and various insurance and benefits plans and policies, as well as oversight of annual audit-related activities.

Mr. Dunican has been instrumental in building Gibbons into one of the region’s most prominent and successful law firms, with more than 300 employees and eight offices across New Jersey, New York, Pennsylvania, Delaware, Washington, DC, and Florida. Mr. Dunican’s seminal innovation as Chairman and Managing Director was identifying a market niche – handling major matters for mid-market companies and mid-market matters for major companies, particularly on the East Coast – that allows Gibbons to remain a mid-sized powerhouse, contrary to longstanding dual industry trends of consolidation and boutique practice. Among numerous other accomplishments under his direction, the firm expanded its geographic footprint down the East Coast, established itself as the premier government affairs firm in New Jersey, maintained its status among the finest litigation firms in the United States, and grew its corporate practice to make Gibbons a “go to” firm in New Jersey for complex corporate transactions. The firm also became a unique player in the higher education space and established the Gibbons Institute of Law, Science & Technology at Seton Hall Law School. Throughout, Mr. Dunican ensured that Gibbons expanded its community presence and remained a first-class corporate citizen, while making Diversity, Equity, and Inclusion (DEI) a real and tangible pillar of the firm’s mission.

During Mr. Dunican’s tenure as Chairman and Managing Director, Gibbons was one of only 20 firms nationwide to be named to The National Law Journal‘s inaugural “Midsize Hot List” and was featured as a “New Jersey Powerhouse” by Law360 at various points throughout the series’ publication. In addition, Mr. Dunican’s focus on marketing and branding initiatives earned Gibbons the distinction of being the only law firm featured in Steve Adubato’s book, You Are the Brand.

Mr. Dunican’s commitment to philanthropic and civic engagement is best illustrated by recent joint endeavors of the Gibbons Cares community outreach and charitable giving platform and the Gibbons Diversity Initiative (GDI), which he fostered and helped guide to fruition. Gibbons Cares and GDI combined forces to more robustly observe 2020 Black History Month and Juneteenth with firm-wide commemorations and diversity-related programming and outreach, including (i) a week-long fundraiser for the Newark Fresh Air Fund during which employees donated over $40,000 to help make up resources the Fund would otherwise have received from the “Battle of the Barristers” charity softball tournament, which had been canceled due to COVID-19; and (ii) a pro bono partnership with the “Small Businesses Need Us” initiative of the Institute for Entrepreneurial Leadership, which assists women and minority small business owners impacted by the pandemic. In 2021, IFEL honored Gibbons with a “Corporate Partner of the Year” award.

More broadly, Mr. Dunican has nurtured the growth of both GDI and the Gibbons Women’s Initiative (GWI) throughout his years in firm management, focusing these programs on recruitment, training and development, retention, and promotion of a diverse workforce at Gibbons; thought leadership, professional association engagement, and participation in pipeline programs throughout the legal and business communities; community service; and a supplier diversity program to create opportunities for minority- and women-owned businesses. He appointed the firm’s first Chief Diversity Officer in 2007.

On a more personal level, in 2013, Mr. Dunican served as the Grand Marshal of the Newark St. Patrick’s Day Parade, raising more money for more charities than ever before in the parade’s 78-year history. He is also a founding member of the Irish American Bar Association of New Jersey and is on the Board of the New Jersey Performing Arts Center.

In May 2020, Mr. Dunican was elected the Chair of the Board of Trustees of Iona College, his alma mater. He has served in various capacities on the college’s Board of Legal Trustees since 2013, including Vice Chair of its Executive Committee, Chair of its Audit Compliance and Risk Committee, and member of its Academic Committee and Committee on Trustees/Governance. Mr. Dunican previously served on the Planning Committee for the 25th Reunion of the Class of 1988. Iona has honored him with its 2013 Legacy Award and 2008 Loftus Award.

In addition to his longstanding work with Iona College, Mr. Dunican remains active with Seton Hall University School of Law, where he earned his J.D. in 1991, serving as a past Chair of its Board of Visitors and Co-Chair of its Strategic Planning Committee. He previously co-chaired the Seton Hall Law Rising fundraising campaign, which exceeded its $25 million goal. During his tenure as Chairman and Managing Director, Gibbons endowed $1 million to Seton Hall Law to establish the Gibbons Institute of Law, Science & Technology, to provide funding to assist the law school in educating and training the next generation of attorneys in the technology and scientific communities. Seton Hall Law recognized Mr. Dunican with its 2011 distinguished alumnus award and its 2015 Saint Thomas More Medal.

Mr. Dunican previously served as a Trustee of the Independent College Fund of New Jersey (ICFNJ), a nonprofit initiative of corporate and academic leaders established to help its 14 member institutions – independent colleges and universities throughout the state – find corporate and philanthropic partners to secure critical financial support and fulfill their mission to educate all qualified students. He has been featured by ROI-NJ, a weekly newspaper covering business in New Jersey, in its inaugural “Higher Education Influencers” list, in the “Key Contributors: Business Partners” category, as well as The Irish Voice, on its Irish Education 100 list of the country’s most influential professionals of Irish descent involved in higher education.

At Gibbons, Mr. Dunican is a member of the Higher Education industry team, which he helped launch in order to address the many unique regulations governing academic institutions, a key segment of the firm’s client base and a substantial component of the New Jersey economy and its research and development environment.

United States Court of Appeals for the Federal Circuit

The Association of the Federal Bar of New Jersey
Trustee

Bar Association of the City of New York

Association of the Federal Bar for the District of New Jersey

Named to the NJBIZ Winners Circle, 2022

Listed as a “Local Litigation Star” by Benchmark Litigation

Named to the “Irish American Leaders of New Jersey” list by PolitickerNJ, 2015

Recipient, Vagelos Award for Corporate Commitment to the Arts, 2013

Named one of “America’s Most Innovative Managing Partners” by Law360, 2010

Mr. Dunican has been named for eleven consecutive years to the NJBIZ “Power 100” list of the 100 most powerful people in New Jersey business.